...well, not really loco, just a drive to Locorotundo. We had driven through a couple of days earlier, but hadn't had a chance to stop. Today were were headed to lunch at Trattoria Centro Storico, a 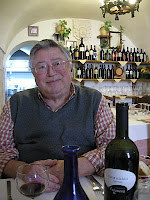 n intimate little spot we had seen in Michelin. We parked relatively easily and walked up the hill. Locorotundo is one of only a dozen villages in Puglia listed in the I Borghi piu Belli d'Italia, a guide to small neglected villages in Italy. (As can be imagined, most are in Central Italy, concentrated in Umbria and Tuscany). Once again it's an old town sorrounded by newer construction that almost butts up to the old city walls. Inside the walls we're surrounded by whitewashed houses houses and the feeling we could be in Greece and not Italy. The hilltop town is really not very big and we're able to wind our way through all the narrow streets in a relatively short time. We notice most of the restaurants are only open for dinner and we've forgotten to check the hours of our 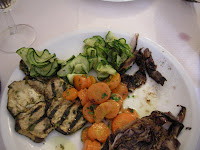 lunch destination. We're in luck this time. The trattoria is open albeit almost empty. We get the menus and make up our minds quickly. It's been a chilly day so we're looking for something hearty. We start with an antipasti of grilled vegetables - zucchini, eggplant, radicchio, and carrots. We were going to split the vegetables, then each of us ordered a pasta and then Stephen was having a secondi as well. We confused the waitress with our bad Italian so the antipasti came out at the same time as Stephen's pasta. Not a problem. The grilled vegetables were meant to be at room temperatu 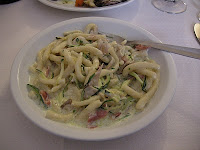 re so his portion could wait until the meat course. His pasta was a strotzapreti (a handmade, handrolled, short noodle) with cream, speck, zucchini, and mushrooms. Just a note here, in case we haven't mentioned, every pasta we've had has been handmade and fresh. Frank's pasta was cavatelli with pomodoro and salsicce. Stephen ordered Stinco, a slow roasted pork shank, remembered with fondness from a long ago stay in Mantua. This version did not disappoint. It was ever 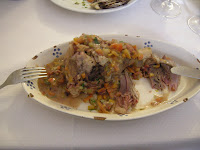 y bit as flavorful and tender as the memory from before. You don't normally see pork shank in the grocery (maybe lamb or veal), but we're going to see about cooking it when we get home. We wanted wine with lunch but didn't think we would drink a whole bottle. The waitress opened a bottle for us and told us to drink what we wanted. They'd just charge us for what we drank. Pretty

neat concept. They must use the leftovers for cooking or wine by-the-glass service. Some amazing cantucci came with the coffee. A slow walk back through the old part of the village and then a short drive home for a little rest before we planned for dinner.

It was looking like this was going to be a foodie day. When we got back to the house we happened to check out the Michelin web site and found there was a one starred restaurant right in our midst - al Fornello di Ricci - right down the road in Ceglie Messapica. Right down the road would turn into a long, long road however. When we left the house we were shrouded in dense fog. We drove slowly back towards Martina Franca and then on the side road to Ceglie. The restaurant is on a small side road, in what appears to be an upscale residential district on the other side of Ceglie. (of course with the for it could have been right next to a high rise hotel and we wouldn't have been able to tell). If you missed the sign to turn off the road you'd never no it until miles later. Sharp eyes prevailed through the haze. A short ways further and we entered a long drive the ended at a charming country house. We walked up and the restaurant was empty. It was early (8:30) by Southern Italian standards but because we didn't know where we were going and since we hadn't been able to call ahead, we wanted to get there early in case they couldn't take care of us and we had to find somewhere else to go. The place was empty. A little man came scurrying out of the kitchen. In limited Italian we asked if they could accommodate us without a reservation. He kind of shrugged and scurried back to the kitchen. A moment later the chef came out and said they'd be glad to have us. The little man (who would turn out to be our waiter) took us to an out-of-the-way table (which actually was perfect for us), aplogized profusely and explained that all the other tables were reserved. Then the proprietress came over to welcome us and thank us for joining them that evening. It was like we were in their home and we were there special guests. We began to peruse the menus while our little waiter (who had now changed into his Burberry shirt and vest) came and poured a lovely rosatto aperitif. The first thing we noticed on the menu was:

Loosely translated, please don't photograph the plates. We must be in a foodie destination! Out of respect for the chef and for the restaurant and for the other patrons (who eventually filled the restaurant up around 10pm) we didn't take any photos. You can check out the restaurant's web site for some great photos of their food - http://www.ricciristor.com/

The restaurant specializes in Pugliese food - heavy on greens and vegetable, but with a sophisticated twist. We started with their version of polpette, small bread and meat (usually liver) balls that are fried crisp. There's were like no other we've had. Crisp on the outside but not greasy and full of flavor. The antipasti consisted of house cured salame and capicola, a cheese and fennel pastry with fennel cream, a toast point with a puree of radicchio drizzled in their own olive oil, rapini in broth, crab croquette, cheese and spinach croquette, and a chicory salad. Even though many of the ingredients could have been bitter greens, all the flavors were almost sweet with flavor. We followed with a primi of a house orechiette with rapini and tomato topped with highly spiced breadcrumbs and a piccolo lasagne verde with truffle and chanterelle. Only one secondi came after that - a veal loin grilled and topped with small fried baby artichoke and a highly reduced negroamaro sauce. Everything worked well with the Negroamaro wine we chose for the evening. The waiter was so quick to pour and decant that we neglected to write the name down in time. We'll definitely be seeking out Puglian wines for the shop when we return. We have yet to be disappointed. A short break and then dessert: an apple tart on a bed of caramel topped with fior di latte capra (a sweet goat milk ice cream as thick as butter), red fruit sauce, and almond brittle, accompanied by the house dessert wine, Madrigali.

A little espresso didn't help the fog outside but it helped keep our heads clear for the drive home.
at February 10, 2011