Truly Trulli and There's no Boardwalk in Monopoli

Another morning and more fresh eggs and cheese from Thomas. Add a little pancetta afumicatte and it's almost a traditional American breakfast. We have another recommendation we want to try today so we're headed back to the coast. This time we're headed a little further north from ye 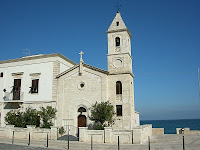 sterday. Again, the plans are a little free form. We'll see what lies ahead. Driving back down the hill through olive groves, stopping briefly in Locorotondo, an interesting town built in concentric circles around a hilltop. On to the ocean for first a bit of bad luck and then some good. The hotel/restaurant we had heard about was closed for the season. Most of Italy's c 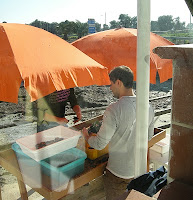 oastal resorts don't stay open in the winter or are open only sporadically. Today we didn't have any luck with our destination. Pulled up at the gate but got no answer. Not to be deterred, we kept on going and came upon the tiny town of Savelletri. This was just our type of place. Miniscule but quaint. Found a cute resta

urant on the water and had a simple lunch of fresh seafood - a fritti misti and grilled, just-caught, swordfish. We spent a little while watching the guys clean fresh sea urchin then headed further north, following a coast hugging road. Next stop was Monopoli, a very old city and a naval starting point for the Crusades. Of course we had to have a look at the coastal castle of St. Stephen. Monopoli has a beautifu 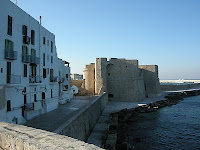 l old town that hugs the coast and a great spot for an after lunch stroll. The Adriatic and the sky were both brilliant blue. The sun was glinting off the whitewashed buildings. We could have been in Greece. The air started to get a little cool and we had left our jackets in the car, so we backtracked to where we parked. Off we went, headed inland.

Even using our map, it's really easy to end up someplace other than where you intended. We weren't really sure where we were heade

d, but suddenly we saw a sign for Alberobello, a town that has huge areas of Trulli. Why, not? Around the round-about and Trulli-ville was our next stop. Again, we first hit a whole post-war modern section of town and almost turned around. When you read about Alberobello in the guidebooks it seems like a Disney fantasy land - Snow White might live right around the corner. While we found amazing sections of Trulli, they seemed in small intimate groupings scattered thoughout town. We may have missed the heaviest concentration, but it really was much nicer to walk through quieter areas where people were really living. It's been a long afternoon and we still have to go home and get ready for dinner!

We decided to go back to al Sagittario for dinner tonight. We saw so many great antipasti coming out of the kitchen that we decided we'd just have that and maybe a pizza. We weren't sure what to expect. The waiter on Saturday night had told us they always have different items on the antipasti. We figured we'd just take a chance. We each chose a pizza to go with, a bottle or wine, and we were off. First came a couple of small plates with grilled marinated vegetables and some marinated seafood. The waiter disappeared. We looked each other and shrugged and decided that maybe Monday night wansn't the best night for antipasti. Before we had taken a bite, the waiter reappeared with another 2 plates - the same items we had on the Saturday antipasti. A moment later another 2 plates, this time small ribs cooked in ragu and tripa (you figure out the translation - we decided we could skip this one), then finally 2 more plates. This time the 2 we had been waiting for - an assortment of fresh soft cheese - buffalo mozzarella, primo sale (fresh ricotta with hazelnut), a fresh creamy burrata-like string cheese -- and the second plate a smoked pancetta wrapped around the buffalo mozzarella but this time put under the broiler. We weren't sure how we were going to finish all this, much less our pizza. We managed to put a dent in the antipasti but barely a slice or two of the pizza. Even though it's not common in Europe, we still asked to take our pizza with us. Just a note about the wine. We let the waiter choose for us. He brought us a Apollonia Valle Cupa 2004 Salento Rosso. An unbelievable selection. However, we were a little concerned throughout dinner about the price. We needn't have worried. 18 euro for the bottle. In a US restaurant if would have been at least $45-50 on a wine list.

Back home and to bed.

There are pictures from Monopoli, Alberobello, and al Sagittario and Stephen's facebook page.