So today we finally decide to explore the old town of Martina Franca. Every day we've made an effort to go out exploring the countryside, but this is a day for staying close to home. We'd been reading a lot about Martina Franca but the traffic we always encountered in the city kept us from exploring further 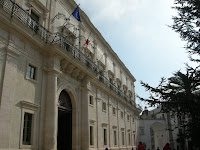 . We're starting to feel a little more comfortable driving through town and have figured out where to go to park and how to avoid some of the major traffic. We lucked into a parking space close to the old town, paid the attendant, and began our walk. What a contrast! The newer city of Martina Franca is full of mid to late 20th century 4 and 5 story apartment buildings, traffic-filled streets, and crazy drivers. The old town is an amazing village with no cars, beautiful str 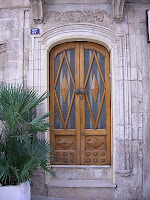 eets, and the most amazing concentration of spectacular doorways we've ever seen. There are lots of photographic journals of doorways and entryways, but we don't know if we've ever seen this many in such a high concentration. The stone ornamentation, the quality of wood carving, even the color of the paint - such interest in such a small area. We've posted a whole section on the store's facebook page. We wandered for most of the late morning and early afternoon, in and out of baroque churches and past rococo palaces and ancient mansions. We realized we hadn't eaten anything, so we stopped in a bar and had a glass of wine and a snack...and another glass of wine and a snack....and a coffee and a sweet snack. Very relaxed, we made headed back to the house to rest for a little while. 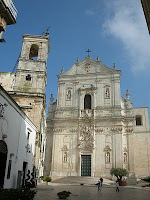 ng Thomas later in the evening for him to show us a new restaurant for dinner. At the appointed time we drove into town to the meeting spot where Thomas was waiting. He jumped in the back seat and directed us back to the old town. We found parking after not too long a time and proceeded to the restaurant, Braceria di Martellotta Francesco. Introductions were made and Thomas handed us over to the owner and a genial waiter. A braceria is a grill. In this case the owner also had a butcher shop so this was a natural extenstion. We first picked an assortment of meat from the case - pork chops, sausage, and lamb. Then the antipasti came. Grilled vegetables, marinated peppers and tomatoes, roasted potatoes with olive oil, involtini of beef in ragu, and assorted olives. We shared a pitcher of house Negroamaro, a local red. Eyes bigger than stomachs had ordered the meat. The antipasti was overwhelming. We could barely touch the grilled meats when they finally arrived. We at least had to taste some of everything, but no way could we finish. We were so full we even decided to skip the walk into the center of town for what had been promised to be the best gelato in the area. We'll save that for another day.
at February 09, 2011