Ravello without a Netta

Today we're leaving Puglia and heading to the Amalfi coast. Puglia has been interesting but we're eager for something closer to what we look for when we come to Italy. We can't get over the density of Puglia and even though we've had a great time, seen fascinating things we couldn't see anywhere else, had exceptional food, and had a wonderful host in Thomas, we're ready to move on. We he 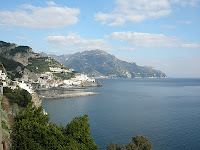 ad south to Taranto. We'll follow the Gulf of Taranto coast for a short way then cut across the country driving through Basilicata and on to Campania. We'll hit the autostrada outside Potenza east of Salerno. After exiting at Salerno, we'll experience the road that makes or breaks drivers, the Costiera Amalfitana. And we'll get to Netta later.

Taranto was a big piece of industrial town pulled off the Texas Coast - think Port Arthur or Texas City. Refineries and stink. On down an uninteresting coastline we turn inland across Basilicata. What a difference! Suddenly we were in the Italy we remembered. Vast valleys with hilltop towns in the distance - and nothing around them except more hills and farmland. Such a contrast with Puglia. Basilicata is one of Italy's poorest and least developed areas. This looks like a spot to spend some time exploring on a future trip. By the time we get to Potenza (a rather large city in the center of nowhere) we've driven over miles of bridges spanning wide, deep gorges, and through tunnels cut deep into the mountains. It's truly a breathtaking drive with glimpses of Greek ruins and the old Appian Way in the distance. We finally hit a bit of the autostrada east of Salerno and gear ourselves up for the next leg of literal breath taking: the Amalfi Coast, as stretch of coastline on the southern side of the Sorrentine Peninsula. Much has been written of this drive. It's not for the faint of heart. Mile after mile of hairpin curves, Italian drivers unconcerned with oncoming traffic or really what side of the road they happen to be on. Throw in a couple of buses and 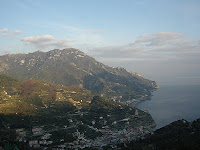 crazy tourists taking pictures from the road and it's a recipe for a pure adrenalin rush. Or a heart attack. While we wouldn't call this a fun ride, it's not at all as hair raising as some claim. There's a reason Stephen drives and Frank keeps his eyes closed though. The road is really narrow in some spots - barely big enough for even one car. We're heading for Ravello, a hilltop town we've been to before albeit 10 or more years ago. We miss the first turn off - not because we don't see it - but because we don't remember it as being the main road to t 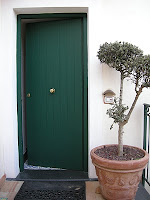 own. Experience on Italian roads will tell you that there may be a sign pointing to the town you where you're going, but another of kilometers down the road there may be another sign and another road going to the same town. Sometimes you just have to know which is the most direct. Today we thought we knew better. Getting halfway to Positano let us know we didn't know better. After finally finding a place to turn around we made our way back down the road and finally up the hill to Ravello. Oh yeah, one minor problem on the way up. We had to wait for a big accident to clear - a Jetta and a bus. The bus won. We finally find out hotel. It wasn't really that difficult, it was just on the opposite side of town from where we stayed before. Since you can't drive across town through the main piazza, we were confused about the location. We checked in to the prettiest hotel we've seen. The Parsifal, a converted 13th century convent. Our room has a nice balcony and a view of the coast. The room is good sized with beautiful tile work everywhere.

Tonight we're off to dine at Cumpa Cosimo, an old Ravello standby full or charm and a little bit of theatre through the owner Netta. You either love her or hate her and think the restaurant is the real deal or a big old tourist trap. We're in the former group. When we were hear years ago, Frank put the charm on Netta and we've talked about her ever since. The food may be average, but it's still a lot of fun. We had walked by earlier and made a reservation. On our way to dinner we walk past and there's nary a soul inside. It's a little early so we walk on the to main piazza. We keep walking and circle back to the restaurant. In the past 20 minutes it's filled to the brim. We're shown to our table. Netta's younger brother comes out (he's a character in himself) and we begin a conversation about the food. We notice Netta is nowhere to be seen. It appears she's on vacation herself - in France. Brother, daughter and nephew still provide us with a great, filling meal and some fine entertainment. Not as good as if Netta was there, but still plenty good.
at February 12, 2011