One last day in Puglia

It's our last day in Puglia. We're trying to decide how to spend the day and of course what to eat and where. We still have some fresh eggs from Thomas as well as some parma ham. Sounds like breakfast at home. We've been going nonstop for days so we decide to take it slow. After breakfast a couple of espressos get us going and we head off to Ostuni again. We had been there Sunday, 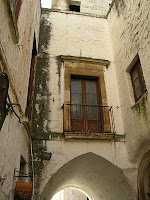 but today we were planning on arriving after 1pm, knowing the shops would be closed, but that parking would be free (we've learned a little in the past week). Lunchtime would be taking place over the next couple of hours so if we decided to get a bite to eat we wouldn't have a problem. It took us a while to find the old city center. Ostuni is like most of the other Puglian towns we've visited - lots of ugly newer buildings hiding an amazing center core. This village center was a little different, though. I had mentioned the Spanish style cathedral we had seen Sunday. It turns out that was the city hall building. The cathedral was buried deep in the city core. And once inside that core, almost everything felt like it belonged in Spain, not Italy. It was an interesting town - what there was of it. One main street that kept going up and up to the very center and then down again. A couple of side streets and alleys ending in dead ends and that was it. Walking back to the car 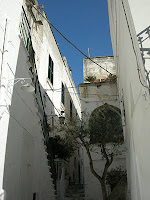 we bemoaned the fact that we never really saw towns in Puglia like we'd found in other parts of Italy where you could pull your car up and find easy parking near a piazza or town square, find a neighborhood bar or care, have a glass of wine or coffee, and enjoy the afternoon. One last time to the coast, we though. It was only a few minutes away and we really felt we knew the best spot to go. Luck was on our side. We pulled into the miniscule town of Villanuovo (it's not even on our Michelin map), right into a parking space 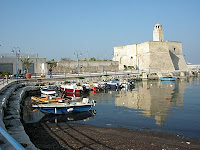 right along the water and walked just s few steps to a waterfront cafe. We sat outside near a large group that appeared to be friends and family of the owner. We ordered beer and wine watched as the whole family, including the kids, were eating huge tubs of sea urchin and drinking copious amounts of beer. When we say tubs, imagine the tub the busboy uses when they clear the dishes in a restaurant. Now, fill it with sea urchin. Now eat it all. Now bring another tub. Unbelievable. We ordered (please don't laugh) french fries. Frank was having a craving, and even though it's not something we'd order outside of France or Belgium, we figured why not. Frank declared these some of the best fries he's EVER eaten. They had been cooked in a great olive oil and had a perfect crust on the outside. It was rather surprising. So 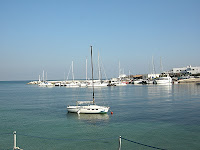 much so we had a second order. And another beer and another wine, watching the family and the sea urchins and watching the boats and the Adriatic. Then a slow ride down the coast and then back towards home. The day had already gotten away from us and we still needed to pack for tomorrow. Except for the traffic in Martina Franca, the drive home was pleasant.

We stopped for a bottle of wine since somewhere during the day we had decided to cook at home. Originally we had thought about pizza again, but we still had some homemade sauce from Thomas' mother, some fresh orechiette, and some arugula for a salad. Frank took the remainder of an already opened wine and poached some pears. Adding a little honey and sugar he created a sauce as rich as the Negroamaro Cotto from Fornello Ricci the night before. We couldn't get through dinner fast enough so we could get to dessert. Dinner was a wonderful culmination of the inspiration and experiences of Puglia. A perfect end to a perfect week.
at February 12, 2011