On the road to Puglia

Overslept again! That's what happens when dinner isn't over until after 11 p.m. Today we're leaving Abruzzo and heading to Puglia. We had hoped to get an early start and take a leisurely drive down the coast. Headed down to breakfast and then quickly packed and headed out. We decided to take the autostrada at least part of the way. Our destination was much further away than we thought. By now we've finally figured out our way around town so there wasn't much of a problem heading to the highway - but this time we just missed the entrance ramp. That's ok. We just kept following the signs through a couple more villages until we got where we needed to go. The drive towards Pescara is beautiful. The snowcaps were behind us and rolling farmland punctuated with rock outcroppings lay between us and the coast. Unfort 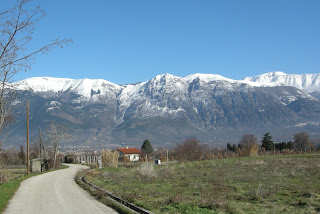 unately the autostrada doesn't have any spots to pull off and enjoy the amazing vistas and since driving while shooting photos is not the safest way to travel we don't have too many photos to show. The highway turned south right before Pescara as we headed out of Abruzzo. The coastline was visible in the distance as we traversed bridge after bridge across deep valleys and gorges. The terrain began to flatten out as we left Abruzzo and crossed into Molise. We suddenly were lacking in vistas. We kept plugging along, only to stop for a late lunch at an AutoGrill. For those not familiar with the Italian motorways, all the toll roads have spots along the highway where you can pull off for gas and food without ac

tually having to leave the tollway. We've eaten at AutoGrills quite often in our travels and find them quite good. Generally we only have panini, but often they'll have full kitchens with specials of the day. They're definitely a step up from most US fast food. The panini are always fresh and are grilled to order. There's even wine by the glass and beer on tap!

We had rented a house for a week near the town of Martina Franca. Thomas, the owner of the house, was going to meet us at the train station and then we'd follow him to the house. This was the first time we were using the phone and text in Italy and we were having trouble making a connection. Whenever you travel, always check with your provider to make sure you completely understand how to dial overseas. We thought we had, but still had some problems. Ultimately we made a connection and let Thomas know about what time we'd meet. We didn't anticipate the traffic in Martina Franca, though. Franca got to mean frantic in Italian. It was Saturday and everyone in the town and from the surrounding villages must have been out - in their cars. And their driving had to be the most aggressive we've encountered outside of Rome or Paris. We expected the train station to be a snap. Most every town we've been too has clearly marked signs pointing the way. Before we left Sulmona we plugged the address into google maps so it was saved on our laptop if we need it. Needless to say, we still managed to get lost. First, there was no sign for the train station and second, you couldn't see a street sign anywhere. Occasionally you'd notice the faded remnants of one on the side of a building but before you could read it the driver b 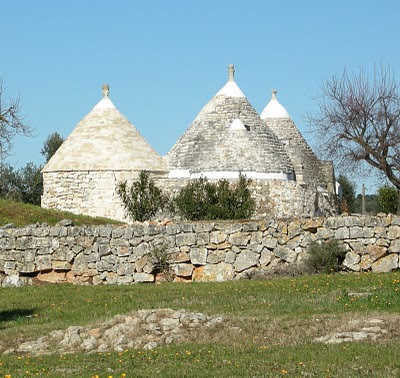 ehind you was blasting his horn or tearing around you and cutting you off. Asked at a service station and then another and then finally found Thomas patiently waiting.

The house is just a few minutes yet worlds away from Martina Franca. It's composed of several Trulli with more rooms added. Trulli are fascinating structures. There's a lot of folklore of where and why they originated. They're mortarless stone structures with conical roofs. We think they look like hobbit houses. This being the 21st century, they've been rebuilt inside with additional traditional rooms added to the original conical structure. We'll have lots more photos of the Trulli when we go to Alberobello in the next few days. Thomas made sure we were set with everything we needed. He brought cheese and eggs from his family's farm. He's left us with fresh orechiette, the traditional pasta of Puglia as well as fresh tomatoes canned by his mother last summer. If we weren't so tired from driving all day we'd probably cook for ourselves. Tonight we need someone else to do the work, though.

Thomas suggests a popular place in town and agrees to meet us later to take us there. Under other circumstances we'd figure that he was taking us to a local tourist trap and going in with us to make sure he got his cut. Nothing could be further from the truth. First off, he's a genuinely nice and generous host as evidenced by the larder he left for us. He lives in Milan but his family lives here. In fact his grandfather used to own this house and while his parents manage it when Italians visit, Thomas flies down from Milan whenever he has English or American tenants. Traffic was still crazy in town. We were stuck in a line of cars waiting to get to the meeting point when we saw Thomas coming towards us and waving us into a hidden parking spot. We then walked together to Ristorante al Sagittario. We arrived just before 8:30 and after quick introductions to the owners, we got seated right away. Within 10 minutes the restaurant had completely filled up and stayed that way until we left 2 hours later. The must have been the most popular restaurant in town. Full of families and This wasn't going to be a fine dining experience, but a fun, lively evening. They gave us menus with English translations. They must have used a digital translation service because most of the names made no sense. Le Stracciate di maiale was "tear her of pork" - appetizing! We made some selections but then found out that the English menu was everything the restaurant ever made, however each evening there was a limited selection of items made fresh for that day. Our waiter was very good with his attempts at English and managed to steer us towards some excellent fare. We started with Stuzzichini, a selection of polpetti ( fried bread and meat balls), foccacia, and potato mashed with olive oil. Stephen followed with angelotti with fresh porcini and cream, then Bistecca di vitella, quickly roasted in a wood fire oven. Frank skipped the primi and went right to the secondi. For him, Salsiccia, 2 long thin fresh sausage rolled and also cooked in the wood oven. They cook most of the meats in the same oven as their pizzas. We paired it with a local wine Salento Primitivo, a local wine similar to Zinfandel. We saw so many more dishes we wanted to try but just couldn't manage any more. We'll definitely be back for their pizzas and assortment of fresh cheese. One is called primo sale, which is much like burrata and made from fresh morning milk. Tonight we finished up with aged grappa. We were using a credit card to pay (not so typical in Europe) so had to go to the front desk to close out our bill. We were shocked at the mass of people waiting to get in. By now it's almost 10:30, the restaurant is still packed as is the entryway and the surrounding area outside. Clearly the choice of the locals. We find our way to the car and it's a quick drive back to the house and another good night's sleep.
at February 06, 2011