Day two of our Paso Robles trip started with breakfast at the diner right near our hotel. The hotel provided a $5 off coupon. Unfortunately that was the best thing about it. At least we had a good deal of fat in our system to protect our stomachs from all the wine we’d be tasting that day. When we headed off, the whole valley was covered in fog. We headed East to check out the lay of the land.

After a short drive, we headed back to the West to our first appointment at Adelaida Cellars. 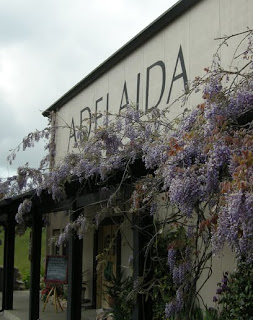 Adelaida is one of our favorite wineries. We discovered their wines many years ago when the daughter of the winery owners worked at Frank’s sister-in-law’s medical practice. We would get yearly shipments from the winery every holiday. When we opened the gourmet shop last year, Adelaida was one of the first wineries we contacted to include in our selection at the store. We carry most of the wines they produce (Chardonnay, Syrah, Version Red, Zinfandel, and Cabernet Sauvignon) so there wasn’t that much new to taste. We really just wanted to meet the winemakers and explore the vineyards. Not to say we didn’t taste. After all, we’ve not been know to turn down a glass or two of premium wine. Plus we would have the opportunity to taste some wines that aren’t available to the general public. We were met by Paul Sowerby who started us off with their new Rose, a Vin Gris de Pinot Noir. The wine is made in a "saignee" style, the fresh juice was drawn off the skins after a short 24 hours and then fermented in barrels following the traditional white wine regime. It delivers gorgeous pinot noir fruit character. Bright reds and salmon colors lead to a bouquet of mineral tinged wild strawberry fruitiness. We're trying to bring this wine into the store, but production is so small that most is already presold to wine club members. Next up were a couple of Rhone style whites, the Version White, a blend of Grenache Blanc and Roussanne, and their Pavanne, a blend of four major white Rhone varieties. The Version White, Adelaida's signature white Rhone blend, delights the senses with honeysuckle, cumquat, and spring flowers. There is minerallity mid-pallette and a crisp apple finish. Our preference was the Pavanne, a blend of Roussanne, Marsanne, Grenache Blanc, and Viogner. Starting with the rich texture and honeyed aromatics of Roussanne. The wine gains further complexity from the green pear minerality of Marsanne, the appley acidity of Grenache Blanc and the peachy richness of Viognier. 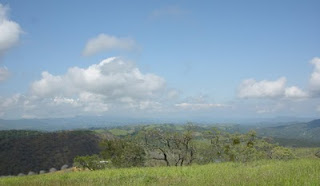 Combining fruit from two Paso Robles' neighboring Westside properties, Glenrose and Halter Ranch, Pavanne captures a flavor purity from mountain elevation and the ever-present limestone chalky soils. From the winerey's notes: "An aromatic mélange of mandarin orange, musk melon and lime intermingle in this refreshing and brisk all season white. A virtual cornucopia of tropical fruits, Pavanne contrasts ripe quince and kiwifruit with tart flavors of tamarind and prickly pear. Named for a medieval dance, 2008 Pavanne is a virtual fruit crossword puzzle, perfect for sipping with a good book or impromptu gatherings when an interesting bottle keeps your friends guessing". We hope to have this wine in the store in the next few weeks, selling at around $22 per bottle. Next up were several single vineyard Syrahs. These aren't available for the store, so we won't go into too much detail. The nice thing was we got to take our glasses with us as we went on a tour of the vineyards. This is a beautiful property. The vineyards are at 1700'. The terrain reminded us of the mountainous region around Badia a Coltibouno in Chianti, combining several hundred acres of vineyards with walnut groves amid miles of rolling hills and oaks. After a great tour and an immensely informative morning, we made our way a few miles down the road to Carmody-McKnight Vineyards. This is a small vineyard specializing in handcrafted wines. We were met by Paul's brother Neal who let us sample some interesting tastes, but probably nothing we'll carry in the shop. From there we literally drove next door to Justin Vineyard and Winery. 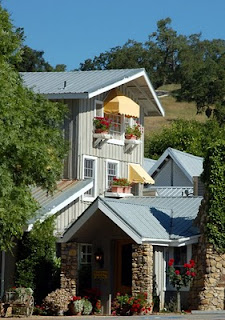 Paul and Neal's buddy from England, Glen, made sure we were well taken care of. Justin was in the process of switching over several of their vintages, so they were tasting some unusual offerings along with a couple of favorites. We zipped through the whites, first the Sauvignon Blanc, heavy in citrus and perfect for warm days by the pool or on the beach; the Viognier, refreshing without the cloying floral of many Viogniers; and finally the Chardonnay, notes of pear, apricot and stone fruit ending in a creamy honey finish. We took a break from the tasting room for a wild mushroom pizza served out on the grounds. (The tasting room doesn't allow food inside - aromas can interfere with the wines. On weekends the dining room is open. They also have a cold case with prepared snacks, meats, and cheeses). After our break we headed back inside for some reds. First up, their Tempranillo. beginning with a complex nose of mushroom, leather, and spice, opening to flavors of black cherry and raspberry in a refined classic Rioja style. Next was their Orphan. While we really enjoyed this wine, there's no need to discuss as it's only available at the winery. No matter how hard you try, you're hard pressed to find it anywhere else. This is the wine made from all the leftover grapes from the season. Always interesting, each vintage is unique. They're already sold out of the 2007 Cabernet at the winery and they're just bottling the 2008. When it's released, we'll have the 2008 Cabernet in the store. The last red was the 2007 Isosceles, Justin's premier wine. The nose is variable over a several minute review: black and blue fruit, firm but inviting oak notes of cinnamon and nutmeg, and a sense of just-roasted dark-roast coffee beans. Later, a note of dark cocoa; a dash of black pepper; a drop of vanilla. The palate reveals an immensely flavored wine, repeating the black fruit intensity and powerful tannins typical of this brilliant vintage. The finish is stately, regal, long. We can't wait to have this stellar selection in the store. We'll let you know when it arrives. We finished off with Deborah's Delight, a truly delightful dessert wine, a blend of Orange Muscat and Viognier producing a clean, sweet, wine that has beautiful floral and stone fruit aromatics. 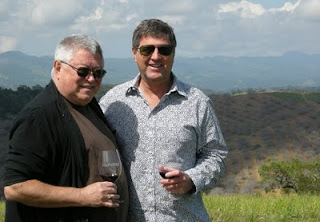 After this we were ready for a break. Putting the top down, we wound our way through the hills back to town. We'll be back soon to recap afternoon wine and snacks and more from Il Cortile.
at May 11, 2010